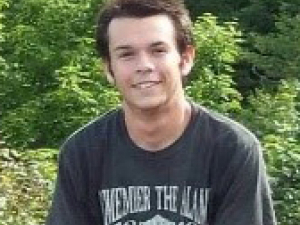 What are you currently doing?

Right now I live in Seattle, where I’m a 4th year graduate student in physics at the University of Washington. I work on two experiments related to measuring the neutrino mass (which is still unknown!) at the Center for Experimental Nuclear Physics and Astrophysics, or CENPA. Primarily, I work for Project 8, which is aimed at very precisely measuring the energy of electrons coming from nuclear beta decay of tritium (or radioactive hydrogen). We do this to learn about the mass of the neutrinos which also come from this kind of decay.  To use atomic tritium you have to split the molecules up, cool the atoms down, and trap them, all using only magnetic fields. The development of that technology is the main focus of my research in Project 8, and that approach is one of the main reasons that Project 8 will be able to push the upper limit on the neutrino mass down further than other experiments.

How did participating in the TUNL REU Program influence your career path?

The TUNL REU was my first experience at a nuclear physics laboratory. Firstly, the work that I did at TUNL, and the people that I met there strongly confirmed my desire to want to continue doing research and to go on to do graduate school. Not only that, but seeing the diversity of interesting research at TUNL and the collaborative environment there had a huge impact on what I was looking for in my graduate school experience, and it made similar nuclear labs rank highly on my list. I went on to choose to work at CENPA, which is a nuclear lab that is similar in many ways to TUNL, even down to their tandem van de Graff accelerator! It’s not an exaggeration to say that the TUNL REU was a primary contributing factor that influenced me to work in the field of nuclear physics.

What is one of your favorite memories from the REU program?

On the science side, one thing that really stuck with me was the tour of the NC State research reactor and the ultra-cold neutron lab. I just recall thinking it was super neat seeing the light blue Cherenkov radiation beneath the water of the reactor, and learning for the first time about the slow moving neutrons literally bouncing around inside of pipes. I didn’t end up going on to work with cold neutrons, but actually the tritium atom trapping used in my research shares a lot of parallels with cold neutron trapping.

Also, during my year of the REU, my cohort made a camping trip out to Grandfather Mountain State Park. A lot of us had in mind a camping trip where you load up a bunch of snacks and s’mores and coolers full of drinks, so that’s what we packed up: a real feast. When we got to the park it turned out the camp site was about a five mile hike up from the nearest parking space. So we had to make multiple trips up to the camp site with all the heavy coolers full of the stuff we packed! It was absolutely exhausting. But once everything was up there we had a terrific time, and plenty of snacks to boot! That’s a really fond memory of my REU experience.

Do you have any advice for undergraduates thinking about a research career?