Quantum computers promise to solve certain problems that are intractable on any current or future classical computer. Recently, small-scale noisy quantum computing prototypes have been constructed, with those consisting of superconducting qubits a currently popular modality. In this talk, I'll give an overview of the history and physics of superconducting qubits, followed by IBM's hardware and software roadmaps for scaling these processors and their applications. As error mitigation is essential in the current era of noisy quantum hardware, I show how Qiskit Research facilitates the adoption of these research tools without the need for low-level knowledge of the underlying hardware and software.
---
Nick Bronn is a Research Staff Member at IBM Quantum in the IBM TJ Watson Research Center in Yorktown Heights, NY. Since joining IBM in 2013, he has been responsible for superconducting qubit device design, packaging, and cryogenic measurement with an eye towards scaling up to larger numbers of qubits at the device level and integration with novel implementations of microwave and cryogenic hardware at the system level. Since his hands-on experimental days, Nick has worked to deploy quantum systems over the cloud and enable Qiskit, an open source platform for quantum computing developed by IBM, for use by startups, universities, research laboratories and institutes, and committed enthusiasts. With an eye on the importance of hardware considerations for near-term quantum computing, he aims to bring Qiskit use to different quantum hardware platforms, hardware-focused quantum applications for IBM quantum systems, and as an invaluable educational tool for the field. Nick holds two Bachelor of Science degrees in Applied Mathematics and Physics, and a Master of Science in Electrical Engineering, all from Georgia Tech, a Certificate of Advanced Studies in Mathematics from Cambridge University where he was a Gates Cambridge Scholar, and a Ph.D. in experimental Condensed Matter Physics from the University of Illinois supported in part by a National Science Foundation Graduate Research Fellowship.
---
Co-hosted with IBM Quantum Hub at NC State University and Kenan Institute of Private Enterprise at UNC Kenan-Flagler Business School.

END_OF_DOCUMENT_TOKEN_TO_BE_REPLACED 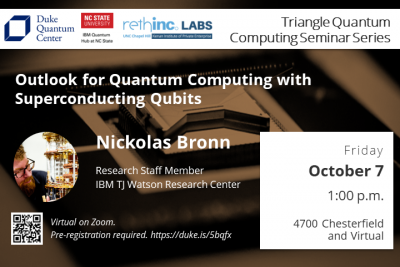